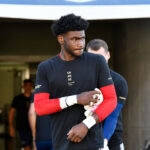 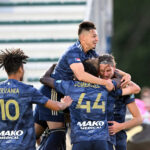 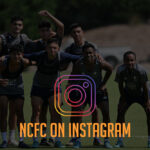 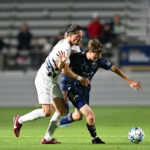 MATCH RECAP: NCFC Weathers the Hailstorm to Take a Point from Northern Colorado


In their first matchup of the 2022 USL League One season, North Carolina FC hosted their rivals, the Charlotte Independence. With both clubs lurking near the top of the table, Saturday night’s skirmish would be the first to determine which team rules the state of North Carolina.

It was a spirited start to the game, with Charlotte holding an advantage in possession but not finding any joy breaking through the NCFC defense.

Charlotte was awarded a free kick just off of the top of the arc in the 13th minute. After some discussion among the Independence players, defender Koa Santos lined up to take the free kick. He put plenty of power behind the ball, but his attempt sailed over the crossbar.

And in the 25th minute, it looked like Golden Boot leader Garrett McLaughlin would add to his lead. The play started off with some great team build-out from the back, with Gustavo Fernandes feeding the ball through midfield to Nicolas Molina.

Feeling pressure from two defenders, Molina turned and slipped the ball through for McLaughlin, who displayed some fancy footwork to get past one defender and evaded a slide tackle from another before firing on goal and forcing Dane Jacoman to make the diving save.

What the first half lacked in scoring, it more than made up for in fouls. By the time the teams went into the locker room at halftime, North Carolina had amassed 14 fouls and three yellow cards, while Charlotte was tagged with six fouls and two yellow cards. At the final whistle, the tally was an eyebrow-raising 32 fouls (17 for NCFC, 15 to the Independence), nine yellow cards, and one ejection.

Despite a goalless first half, North Carolina got more comfortable throughout the first 45 minutes. And the new partnership of McLaughlin and Molina—in his long-awaited NCFC debut— was already demonstrating the potential to wreak havoc on back lines throughout the league.

The partnership paid off in the 61st minute when McLaughlin picked up a well-placed pass from Nelson Flores Blanco and forced defender Carson Talboys to chase him deep into Charlotte’s defensive end. McLaughlin cut inside at the top of the six-yard box and spotted Molina, who stuttered his supporting run, forcing his defender to fly past him. McLaughlin dropped the ball back to the wide-open Molina, who only needed to redirect the ball past Jacomen.

The 2021 @USLLeagueTwo MVP breaks the deadlock in Cary 🇦🇷

If anyone happened to spot a sly smirk on the face of John Bradford along the sidelines, it was probably because he had Oalex Anderson waiting in the wings. Bradford brought Anderson in for Molina in the 69th minute, and it didn’t take long for him to pick up right where he left off with McLaughlin as the two attackers kept the Charlotte defense on its heels.

With the game clock winding down in the 86th minute, Anderson took a pass at midfield and split the defense as he turned on the jets and sprinted in on goal. Independence defender Shalom Dutey got close enough to haul down Anderson just inside the penalty area. The center referee immediately pointed to the penalty spot while Dutey argued in vain that the foul happened outside the penalty area. Already on a yellow card from the first half, the foul on Anderson earned Dutey his second card of the game and an early trip to the showers.

Once the dust settled, McLaughlin made quick work of the PK, doubling NCFC’s lead and tallying his league-leading seventh goal of the season.

North Carolina held off the 10-man Independence squad for the remaining three minutes plus stoppage time for the 2-0 victory. It was a second clean sheet for goalkeeper Will Pulisic. And it was a solid all-around performance from the club, with captain Jordan Skelton making 13 clearances—nearly all of them with his head.

“I’m certainly pleased for the group to get a good result this evening and put together two consecutive goals back-to-back,” Bradford said after the game.

Bradford was also dishing out praise on Molina’s debut. “Molina’s just getting started, you know, and credit to him for being able to stick through all the immigration and visa process and all that kind of stuff and stay centered in terms of focus.”

The win boosts NCFC into second place in the USL League One table just a point off of Richmond with a game in hand.

As for the Independence, they’re going to have to wait until late September for a rematch.

Catching Up on NCFC News

NCFC head coach John Bradford was named the USL League One Coach of the Month for May. During the month, North Carolina FC won three out of four matches, moving up to second place in the table.

The honors racked up for the Dead Whales, with Garrett McLaughlin, Oalex Anderson, Luis Arriaga, Jaden Servania, Raheem Somersall, Jordan Skelton, and Christian Lue Young making the USL League One Team of the Week during the month of May. McLaughlin was named Player of the Week to round out the month.

Next up for NCFC: the team heads to Fresno, CA, on June 25 to take on Central Valley Fuego FC for the first time. Then they travel to Greenville on June 29 and Richmond on July 2 before returning home to face Union Omaha and celebrate Pride Night on July 9. You can get tickets for all home games at northcarolinafc.com/tickets.

Thank you for subscribing!

Standings provided by SofaScore LiveScore
All Photos on WeAreNCSoccer.com are copyrighted by Gregory Ng of Follow Greg Sports
This site is not affiliated with North Carolina Football Club